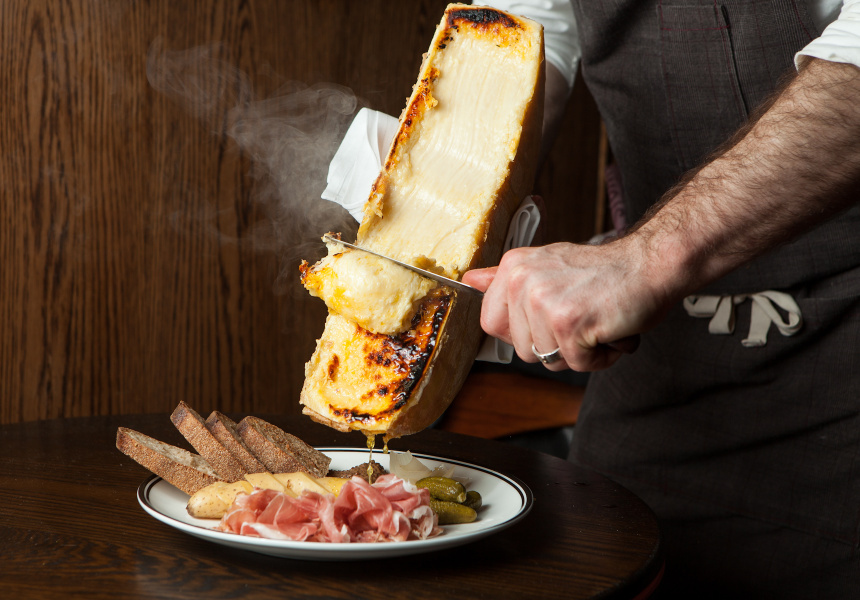 “Are you sure you’re ready for this?”

The woman standing in front of me holds up her heavy-bladed scraping knife and raises her eyebrows. Her tone of voice would be appropriate for the attendant at a bungee jump, or a skydiving instructor. I nod and try to hide the excitement in my voice. “I’m ready, let’s do this.”

She holds the bubbling cheese rind over a plate of boiled potatoes, sauteed mushrooms, pickled onions and tiny cornichons, and holds the knife at the top edge. The rind has been sitting in a specially designed rack under a broiler, and its surface is a bubbling, molten expanse the color of pale gold. She tilts the rind at an angle, and uses the knife to scrape loose the melted layer of cheese on the surface, sending a glistening flow of molten cheese and crispy broiled rind over the waiting vegetables. She takes great care to carve me off extra bits of the crispy, lightly burnt rind. “This raclette is local to Washington state, and has a washed, salted rind, so it is definitely edible and is actually my favorite part of the cheese.”

She hesitates and looks up, almost guilty. “Sorry, I spend too much time around cheese.”

Once all the melted layer on the rind is extracted, she exchanges it for a much larger piece on another rack to finish the job. This piece looks to be almost half a wheel, eighteen inches across and another 6 tall at its widest point. She gestures to the almost consumed rind, back on its rack with its surface already softening and bubbling. “That started out the day this size,” gesturing at the half wheel in her hand, “it’s been a good day for raclette, I guess.”

She scrapes the molten layer off the top of the half-wheel, and hands me the plate. She informs me that a normal serving is about a quarter pound, “Like the size of a burger, but all delicious cheese.”

The plate is a lumpy expanse of pickled or roasted veggies, covered with a thick blanket of melted cheese, with shards of the burnt rind dotting the surface.  I take a bite of roast potato after spearing a pickled onion and a big crust of burnt rind. The cheese gives off a warm, vaguely foot-y funkiness, akin to a very gentle taleggio or a ripe brie. The tart, slightly sweet pickled onion cuts through the intense richness of the cheese and the earthiness of the potato and mushrooms. Spiked through it are the salty pops of the rind, which tastes like the crispy, burnt edges of cheese from a pizza, times a thousand. I am in heaven.

Raclette is a regional delicacy indigenous to Switzerland and France – the dish is named for the cheese used, called raclette, a firm, nutty and slightly pungent cow’s milk cheese with a melted consistency somewhere between fontina d’aosta and very toothsome meat or roasted eggplant. The dish is also named for the method of serving it: the name is derived from the French verb racler, meaning “to scrape”.

The dish has been enjoyed in Europe for over 700 years, and credit for its invention goes to the Valais and Savoie regions of Switzerland and France. In either locale the ingredients and preparation are identical: cut a wheel of raclette cheese in half, put the cut side towards a source of high heat, traditionally an open flame, and wait. As the dense cheese heats, the top layer of the exposed cut melts, bubbles and burns around the edges. This layer is then scraped off the wheel onto bread, boiled or roasted vegetables and cured meats and eaten with tea or light, refreshing wine. The remaining cheese is returned to the flame for the next lucky diner’s share to melt.

While relatively common in the countries of its origin and their neighbors, raclette is still something of a rarity on the west coast of the US. Maybe its the potentially unsavory similarity to that icon of mid-20th century dinner parties, fondue;  maybe it struggles to gain traction because it is just very, very rustic food. At first glance, raclette looks humble indeed – it is “just” unadorned vegetables covered with a pool of molten cheese. And make no mistake, this dish has deep roots in peasant cuisine – the dish is believed to have been invented by roaming cow-herds, who would carry loafs of bread and wheels of raclette cheese with them into the pastures with their herds, making camp to build a fire, toast bread and melt cheese to scrape onto it.

But to call this food “humble” or “rustic” is a disservice. Its simplicity hides its beauty – the wonderful, meaty cheese. Raclette is first and foremost a celebration of the cheesemonger’s art, and everything on your plate is there because it compliments the cheese; its flavor, its texture, its beautiful transition from thick, molasses-like liquidity into wonderfully stretchy, toothsome semi-soliditiy as it cools. So many foods in America add cheese as a sort of grace note, an extra level of richness on a dish, but forever a sidekick, the Robin to your burger’s Batman. Not here. Here the cheese is king, and everything you eat it with is just a vehicle for that melty goodness. Raclette is food porn for cheese fetishists, and I am hooked.

If you are looking for raclette in your town, and lack French or Swiss restaurants to investigate, it can be made at home; purpose-built table-top raclette grills exist, are quite popular in Europe, and can be purchased online. It can also be made in an oven under a broiler with a sheet pan and a little jury-rigging to keep the raclette facing the heat, although this requires a certain amount of hovering to ensure your cheese doesn’t melt too fast or burn too much. The cheese itself should be available from specialty cheese shops, both online and physical.

I prefer to serve raclette at home with crusty bread, and if I can get access to a charcoal grill, I love serving it with grilled bread and veggies. Cured pork in the form of prosciutto or Jamon Iberico is a natural accompaniment, as are all manner of vinegary pickled veggies – pickled cauliflower, gherkins and onions being my personal favorites. Serve your raclette with a refreshing green salad and crisp white wine for a perfect summer dinner, ideal for the back yard or the patio.

If you like to camp, consider eating raclette as the cow-herds of Valais and Savoie did – under the stars, sitting around a fire with your friends, passing around a bottle of wine (or something stronger) while you toast bread and melt a cheese wheel over the flames. However you enjoy it, take your time! Melting and serving the cheese is a time-consuming affair, and it is intended to be a leisurely meal, replete with conversation, drinking and relaxing while you wait for the cheese to melt.