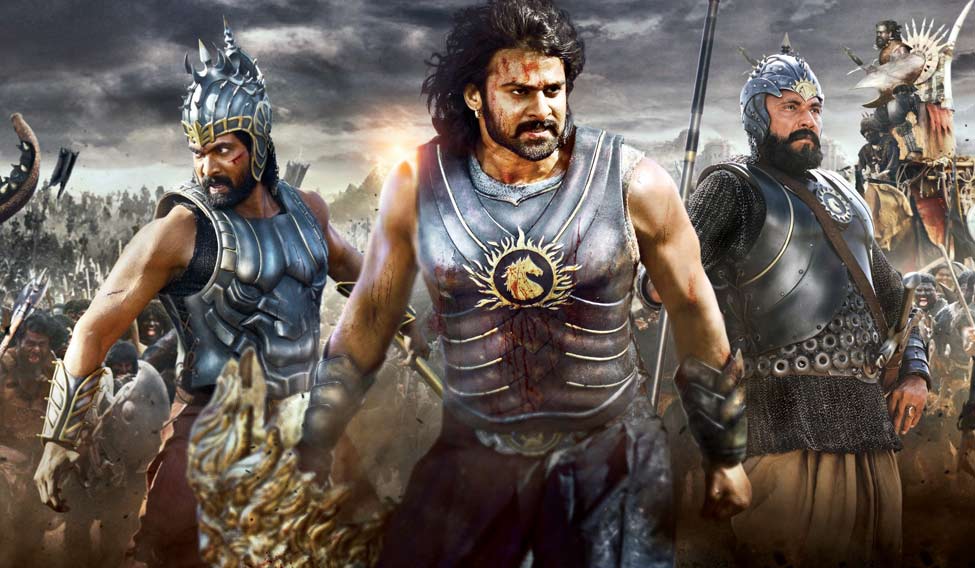 While I definitely know what genres of movies I enjoy – fantasy, sci-fi and horror – I make a point to try and watch movies outside of my usual comfort zones, and I make a special point to watch movies from outside the vortex of Hollywood and US culture, so how the hell did I manage to sleep on Indian sword-and-sandal epic Baahubali until 2018? While the second half was just released last year, the first part is nearly three years old. I’d heard its name, but never got around to watching it until this week. Whatever my reasons, I was a dumbass to put it off. These movies were great, and I was missing out without even knowing it.

For those not in touch with Bollywood (AKA like me, the aforementioned dumbass), Baahubali is a massive 2-part fantasy epic directed by Indian cinema luminary S. S. Rajamouli, telling the story of a legendary warrior-king, Mahendra Baahubali, as well as the tale of love, vengeance, courtly intrigue and war that surrounded and ultimately killed his father, Amahendra Baahubali. And when I say massive, I mean massive. The story is broken up into two films, each of which clock in at over two and a half hours. It’s a lot. Don’t be daunted though, because those hours flew by, which is saying something.

The movie is full of beautiful cinematography, with a particular love of sweeping, long distance shots of immense mountains, fortress-like walled cities and huge battlefields. And speaking of battle, the war and combat scenes are some of the best I’ve seen in a long, long time. Why do we not see more Indian sword-and-sandal epics like this in US theaters? This movie would absolutely appeal to anyone hankering for some larger-than-life fantasy action, and very little of the content would go over the head of a non-Indian audience.

The combat scenes in this were, in my opinion, on par with any of the big Hollywood fantasy epics. The action choreography in Baahubali could absolutely hang with the greats like the Lord of the Rings trilogy, or Chinese epics like Red Cliff. The small-group and one-on-one duels are kinetic and weighty, with a love for bone-jarring impacts, and fluid, CGI-enhanced action. One fight scene involving Amahendra and his bodyguard/servant/adoptive uncle Katappa versus a gang of bandits revolves around the two heroes aiding one another by throwing one another weapons while leaping, sliding and  re-positioning each other and hurling their opponents against trees, rocks and one another, all with balletic grace.

The large-scale war scenes are similarly dramatic, with the action emphasizing war machines and beasts like (entirely CGI) stampeding bulls and trained war elephants. The main characters are often seen cutting solitary swathes through huge numbers of faceless enemy mooks in a style more reminiscent of a video game like Dynasty Warriors – it’s a thrillingly realized power fantasy, and it looks great. The last 40 minutes or so of the second movie is one long, extended battle, moving from the massed soldiers of a battlefield to an over-the-top siege of a fortress involving groups of soldiers being catapulted over the walls, to a prolonged duel between the titular hero and his evil uncle, King Bhalladeva, and it rocks.

You cannot talk about a Bollywood movie without discussing the musical numbers and dancing – Baahubali is filled with music, and the songs that are performed build on the melodies and rhythms of the score, so that when the characters break into song or dance, it feels wonderfully organic, as if the background music of the film’s world is swelling with exuberance. Much of the music has a religious, devotional feel to it, which gels nicely with the mythic, folkloric dimensions of the story.

If you’re a fan of big, beautiful sword-and-sandal fantasy epics, the kind that seem to have fallen out of favor in Hollywood of late, you owe it to yourself to get to Netflix and watch Baahubali. Don’t be a dumbass like me.